The Parents' Information Bureau (PIB) fonds consists of records from the clinic for family planning and birth control set up by A.R. (Alvin Ratz) Kaufman of the Kaufman Rubber Company in the 1930s. The main branch of the PIB was located at 410 King Street West in Kitchener, Ontario. Between the mid-1930s and the mid-1970s the PIB published a series of numbered reports, forms, and informational pamphlets regarding birth control and sterilization. The publication numbers were reused by the PIB for revised editions and for documents containing information about related topics that were likely circulated as part of an information packet. See the Parents' Information Bureau fonds finding aids for more information.

Content note: The views expressed in PIB publications reflect the era in which they were produced. They include family planning thinking rooted in eugenics, the belief that the genetic makeup of the human population can be improved by limiting the ability of people deemed inferior from reproducing. Demeaning language about lower class and disabled people appear throughout. Information about the handling of this type of language in archival descriptions can be found on the Special Collections & Archives website.

#01: Report on family planning activities and the Parents' Information Bureau

#03: A brief for the sterilization of the feeble-minded 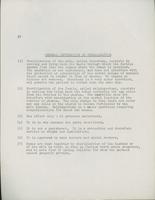 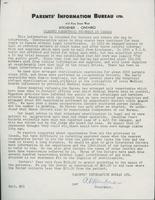 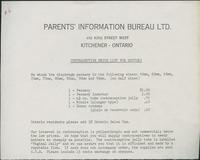 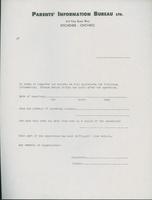 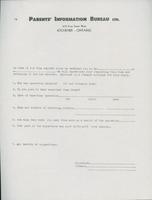